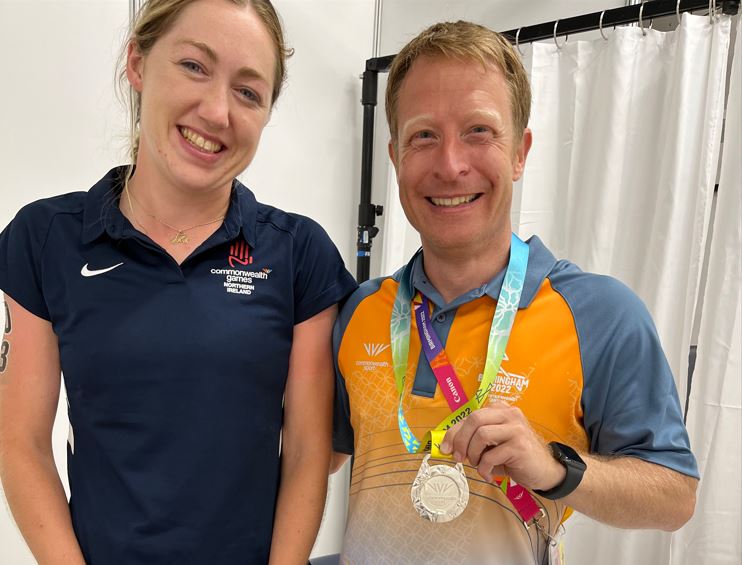 16 August In General by Lyndon Ogden

David Stringer at the Commonwealth Games 2022

This time David was based at the Athletes Village at Warwick University, where he spent his time split between covering training and competition events as well as treating athletes in the Poly Clinic.

The Poly Clinic is where the athletes can drop in and make appointments to see a variety of specialists including Physiotherapists, Sports Massage Therapists, Osteopaths / Chiropractors, Podiatrists, Dentists, Opticians, GP’s and Sports Medicine Consultants. There is also the facility to immediately send athletes for Ultrasound and MRI Scans.

Due to his experience in Sports Trauma, David spent several days at the Judo and Wrestling training venues, on hand should anyone suffer serious injury. To qualify for this role Physiotherapists had to hold specific sports trauma qualifications and David has taught on these courses for a number of years for both The Football Association and The Rugby Football League.

At the Warwick Road Race Cycling event David was stationed at the finish line, available to treat athletes as soon as they came off the course and also in event of serious injury.

Perhaps most satisfying of all David was able to help members of the Samoan Rugby 7’s Team and Silver Medal Winning Triathlete Catherine Sands, who insisted on David trying out her Medal.